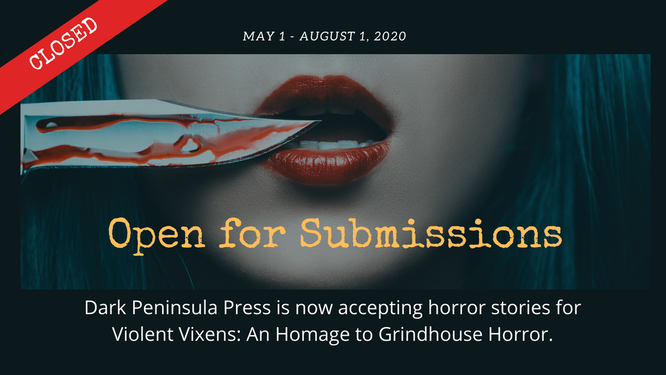 Our second fiction anthology, Violent Vixens, will focus on Grindhouse horror films, made famous by movies such as Night of the Living Dead, Death Proof, and Suspiria. Since this genre encompasses so many different styles and mashups, we have decided to focus solely on Grindhouse horror stories featuring a strong female lead. The lead may be the protagonist or the antagonist.

In 2007, Quentin Tarantino and Robert Rodriguez set out to revitalize this genre with their excellent double-feature, Grindhouse. Although it was met with critical success, it ultimately failed at the box office. However, in recent years, the genre has gone through a resuscitation of sorts, and a new era of filmmakers are now creating homage-style exploitation films using the borrowed aesthetics of the 70s and 80s--successful films like House of the Devil and Mandy. This is exactly what we are looking for in your stories; we want to see your particular homage to this style of storytelling in narrative form.

We are looking to publish around twelve pieces of original fiction for this anthology. Overall, we tend to lean more toward action-oriented stories like Army of Darkness, Planet Terror, and Blood Drive, over anything too serious and brooding. Genre mashups are HIGHLY encouraged. All stories and characters must be original works.
Influential Horror/Exploitation Movies: Night of the Living Dead, Dawn of the Dead, Mad Max, Halloween, Texas Chainsaw Massacre, Suspiria, Evil Dead, Motel Hell, The Hills Have Eyes, Last House on the Left, Cannibal Holocaust, Black Christmas, The Beyond.
Influential Grindhouse Movies (homage/tribute): Planet Terror, Death Proof, From Dusk Till Dawn, Mandy, Kill Bill, Blood Drive (TV Series), Ash vs Evil Dead (TV Series), Drive Angry, Tokyo Gore Police, Crimson Peak, Slither, House of the Devil.
Influential Authors/Series: Grindhouse: Doors Open at Midnight by Alex De Campi, Hack/Slash by Tim Seeley, Beast House Chronicles by Richard Laymon, The Drive-In Collection by Joe R. Lansdale, Dead River Series by Jack Ketchum.
Read more about the Grindhouse genre HERE:
Back to Main Submissions Page:
Note added on 4-21-20: Opening for submissions soon. Feel free to include a tagline for your story, centered underneath the title. For inspiration, look at the film posters from the above list. This is not mandatory for submissions, but each story will eventually be published with a tagline. Also, please pay attention to the submission guidelines before submitting. Good luck!
Note added on 6-16-20: At the halfway mark... six weeks in! We've received around eighty submissions so far, and more are coming in every day. If you want to sample what kind of stories we like, you should buy a copy of our first anthology, Negative Space: An Anthology of Survival Horror, available through Amazon. You can get your copy by clicking HERE.
Note added on 7-1-20: One month left to send your stories! We've received a hundred submissions so far. Want to gain an edge on the competition? Read this INTERVIEW.