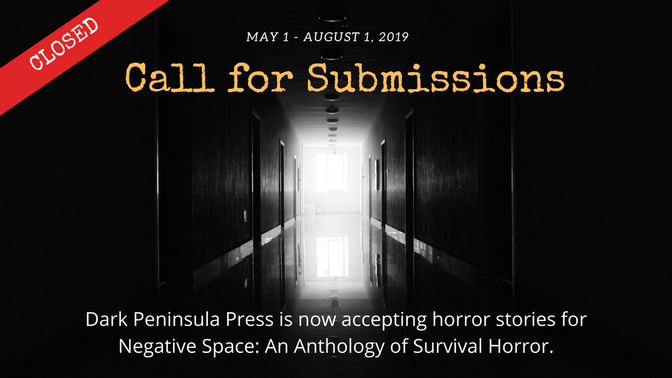 Our first fiction anthology, Negative Space, will focus on the survival horror genre of video games, made popular by such legendary franchises as Resident Evil, Silent Hill, and Amnesia. Although the term "survival horror" was first coined for Capcom's 1996 release of Resident Evil, it is now a widely used term in video game verbiage. Overall, our main goal of this anthology is to incorporate elements of the survival horror tradition into narrative fiction writing.

So, in essence, what is survival horror? It is a sub-genre of horror video games in which the protagonist(s) must face dire situations in locations far off the beaten path by using the environment, or items found in the environment, to survive. While it's safe to assume that "survival" is a common element in most horror stories, there is an extra emphasis in a survival horror story. It could mean finding escape, or fortifying a position and awaiting rescue, or fighting the threat head on with the use of traps and/or under-powered weaponry. Think of Neil Marshall's film The Descent, or the last thirty minutes of Predator; that's what we're looking for.

We are looking to publish around twelve pieces of original fiction for this anthology. Please keep in mind that this will be an experimental collection that favors active horror stories over quieter, literary pieces. When writing your story, think of dangerous locales, overwhelming odds, makeshift weapons, cryptic journals, secret underground facilities, and deadly traps. For inspiration read Stephen King's "The Mist," or play the new Resident Evil 2 remake, or watch John Carpenter's The Thing, then try your hand at writing your own survival horror piece. We'd love to see what you come up with.
Influential Games/Series: Resident Evil, Silent Hill, Clock Tower, Fatal Frame, Dead Space, Rule of Rose, Siren, Parasite Eve, Amnesia, Haunting Ground, Obscure, Tomb Raider (2013 reboot), Eternal Darkness, Outlast, The Evil Within, Dino Crisis, The Last of Us.
Influential Novels & Novellas: The Mist by Stephen King, I Am Legend by Richard Matheson, Off Season by Jack Ketchum, Bird Box by Josh Malerman, The Shadow Over Innsmouth by HP Lovecraft, The Terror by Dan Simmons, The Girl With All the Gifts by M.R. Carey.
Influential Movies: The Descent, The Thing, Alien(s), Cube, Predator, Crawl. Night of the Living Dead, Deliverance, Jaws, Rogue, Wrong Turn, Green Room, The Hills Have Eyes, The Edge, A Quiet Place, 28 Days/Weeks Later, Open Water, The Ruins, Pitch Black.
To read more about the history of survival horror, click HERE
To read more about how negative space is used in survival horror, click HERE
Back to Main Submissions Page:
Note added on 6-23-19: Although this is a sub-genre created by video games, you don't have to have knowledge of video games to submit. You could look at this as a "survival against the elements" type of story, or a "survival against something in the woods" type of story. But keep in mind...the protagonist must be at severe odds against his or her adversary. Good luck!

Note added on 7-19-19: We're starting to see a lot more "military-style" horror coming through the submission floodgates. You are welcome to submit these kinds of stories, but keep in mind that military horror is generally not a good fit for this anthology. This anthology is more about making due with a VERY limited amount of resources. It's about intelligence, evasion and craftsmanship...not raw firepower.

Note added on 12-8-19: We're going to open for another round of submissions soon. There are 4 slots left to fill for this anthology, but we're more interested in shorter stories this time around: 2,000 to 5,000 words in length.